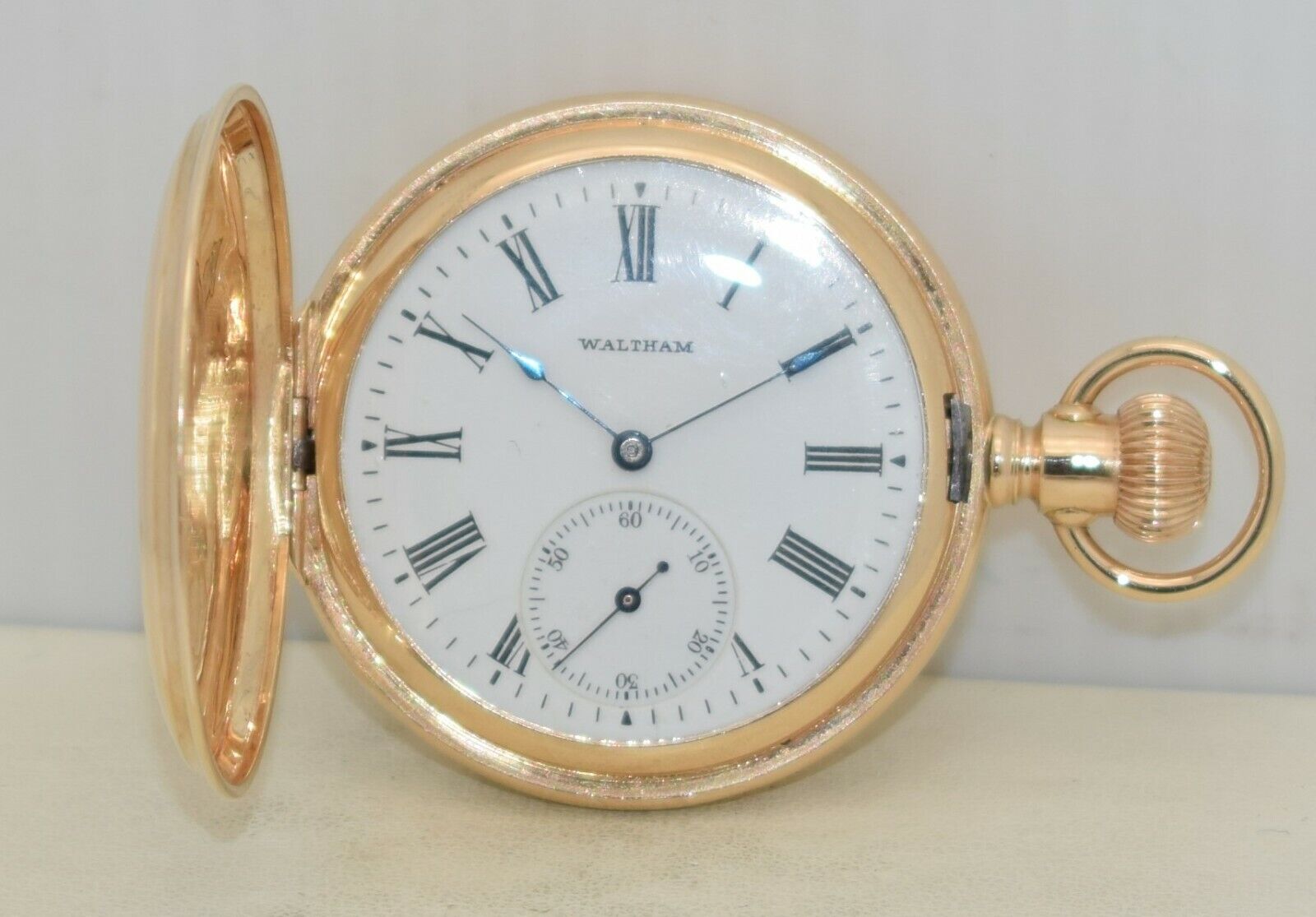 Welcome to River City’s Watch Liquidation Sale!  We have recently purchased an absolutely massive collection of vintage and estate watches.  Follow us as we’ll be listing new items each and every week!

This listing is for:

Beautiful Antique Waltham pocket watch up for grabs!  This is a 14-Karat Gold Waltham Seaside Model 1890, a 6-size, 15-Jewel Hand-Winding Mechanical Movement, Circa 1902, Serial #11280235.  It winds and sets easily, seems to run well and keep good time but last service date is unknown.

It is cased in a beautifully designed, high-polished solid-gold hunting case!  Case is marked: C.W. MF’G CO, WARRANTED 14K US ASSAY.  Serial #194130 and it measures 40.3-mm in diameter.  The case has been polished, buffed and ultrasonically cleaned.  It weighs 24.8 grams!  That weight includes only the case with inner spring, stem and crown (does NOT include movement).

Case is in very good condition, excellent luster and design with only some minor blemishes, covers/hinges work well, Crystal is glass in great condition, Dial has faint hairline but looks great, hands look very good!  Pictured with and without flash for your viewing pleasure.  See item specifics for more details.

Please view all pictures and read condition notes, if applicable, as they are part of the description.  If you have any specific questions, comments or concerns, feel free to send us a message!

Pocket watches are individual timepieces that can around be carried in one's pocket. They are strapless, and they sport traditionally displays that are analog. Though not always a current feature, silver pocket watches often have hinged address to protect the watch face. Fobs or pocket watch chains are often current to secure the timepiece to a waistcoat, belt loop, or lapel. Most pocket that is antique also have fasteners designed to be put through buttonholes and worn in a waistcoat or jacket.


Pocket watches could be any 1 of 2 kinds. The very first kind are open-faced watches, or hunter-cased, often known as Savonette. The second, and possibly the most type that is common features a hinged front cover that protects the crystal face of the watch. Traditionally, the stem or pendant of a Savonette is set at its twelve o'clock position. The hunter's stem, on the other side, is positioned at the three o'clock position.


In present times, silver pocket watches have become collectors' items. a antique pocket watch is bound to catch the attention of enthusiasts. Pocket watches have also significantly increased in value. Despite their plain faces, railroad pocket watches are particularly appealing for the standard of their craftsmanship. You can find additionally vintage that is several watches worth mention.

An Elgin pocket view made 50 to 150 years ago can be of practical use today. These pocket watches are considered symbols of America's rise from an agricultural country to the powerful commercial country it is today. Waltham pocket watches were the initial antique gold pocket watches to be mass produced, with the concept of producing silver pocket watches at a price that is affordable.

The pocket watch is a survivor. It survived the painful beginnings of the railroad system and is still worn today, in the age and place of commercialism. Beautiful, exquisite, and timeless, the pocket watch will be around for years, maybe even centuries, more.

History Of The Pocket Watch
The History And Development Of The Pocket Watch The annals of the pocket view is often overlooked in importance because of the many other inventions that were taking place. But, the pocket watch provided us aided by the portable that is first giving us the power to know just what time it absolutely was wherever we were. The pocket watch was an unit which was very rich in the sixteenth century and only the high class could possess.

In the 16th century clocks were produced utilizing springs instead of weights, signifying the transfer from clocks to watches. These old pocket watches were the first timepieces that may be owned by the public. Owning a pocket watch signified the status, power and wealth of a person.

The century that is 17th pocket watches even more desirable with a fresh look to your figure. The view had changed from its original box-like check out a new rounded and case that is slimmer. Craftsmen began working ever so hard to create designs on every pocket watch made.

In 1675 some watchmakers discovered the need for a spiral spring. The accuracy of the pocket watch increased greatly by attaching the spiral spring to the balance. It was now possible to inform time by the moment as oppose to being off by a hours that are few. Using this new discovery, the minute hand was born regarding the pocket watch.

The 18th century saw added improvement to your pocket watch with further development and more added features to drive up the price. Oil had become a method that is popular lubricate and smoothen the motion of this hands of the watch. Jewels had started to be used for the bearings in watches while diamonds were applied to the priced that is high. This shot the cost up to again provide the rich the capacity to show their wealth and status.

Another hand was introduced to show the increased precision in time in the middle of the 18th century. It was only a matter of time that a third hand would be added seeing that we had been aware of time down to the second now. This allowed people to know the exact time it was through there pocket watch.

The century that is 19th several famous pocket view makers that increased the worthiness of the watch. Having numerous watchmakers added your competitors to the caliber of view they sold, including just how much they sold their watches for. The product quality of watches sold had been now a lot better than ever with much more reasonable costs. The 19th century signified the peak of the pocket watch that is old.